Tom Enright’s story begins with an ad in the Chicago Paper. He was 23 years old, fresh out of college, and saw an ad for a job selling lightbulbs door to door. His girlfriend advised against it. He took it anyway.

In this, he found his true calling as a salesman. He’d get up on a ladder and replace old bulbs with the new ones, demonstrating the difference. The pitch was, “different and better”; lightbulbs that would change your life. Or at least your sight.

“I was good at it,” Enright said. And he kept moving up. It brought him from Chicago to Fargo, to company headquarters.

In 2007, after ten years with the company, he told the owner he thought they should sell lightbulbs online.

“He told me I was nuts,” Enright said. “And that it couldn’t be done.”

Enright knew it could be done. Two years later, he started building his first e-commerce website, NorthernLightsUSA.com, on a Drupal platform. He spent his days working full-time, coming home to eat dinner with his wife Tammy, playing with his daughter, and then adding product to the website until 3:00 AM. For six months he lived this way, manually inputting every product and every price.

The day the site went live was Enright’s first day at Northern Lights USA. They had $10,000 of product and a very small savings account.

“I remember sitting there waiting for my first order to come in,” he said.

But the going was rough. In fact, he had to start door-to-door sales again in order to keep generating income. Every dollar they made was put back into the site and social media. They built a brick and mortar shop and another website called Lightbulbs 247 to help sustain the business as well.

It took nearly three years before they were able to focus entirely on e-commerce. And then, when they had just started to make money, Enright’s personal life was rocked to the core.

At 6 months old, Chase started having seizures, and they couldn’t understand why. When he was 11 months old, Chase was diagnosed with a rare form of epilepsy that meant the child would regress to the point of death or mental retardation.

Chase as an infant

They spent a year traveling to Mayo Clinic, while Enright struggled to sustain the e-commerce business he had worked so hard to create.

The Mayo doctors told Enright and his wife that their lives would change, and that Chase would never have normal brain function. And for a time, Chase’s brain did stop functioning normally. Statistics were thrown around, numbers like “over 90% of children with this diagnosis don’t get better.”

And then, like a switch flipped off, Chase was fine.

Chase will be four years old in September. He’s not on medication. He doesn’t have seizures. In fact, he’s already started reading.

“If you were to see him today, at the pool or the park or at school, you would have no idea. He has no idea,” Enright said.

It was then, awed by the miracle of their son’s good health, that Enright and his wife realized they wanted to do something different.

So in November of 2015, a little over a year after Chase got better, Enright created GoodBulb: a lightbulb company focused on providing savings, education and supporting social causes.

“It’s a name for everything we want to do,” he said. “We want to do good with every lightbulb that is sold.”

They’ve already started locally. In February, Enright made headlines by selling blue lightbulbs in support of Officer Moszer, and donated 100% of sales, totaling around $7,865, to the Moszer family.

In the long run, Enright wants to use GoodBulb to supply homes in third world countries with LED lanterns, and replace kerosene lanterns. He plans to partner with organizations already on the ground in these areas, and use GoodBulb’s profits to buy thousands of lanterns. One day, he said, he’d like to take the trip himself.

“There’s so many of these remote areas that don’t have light,” he said. 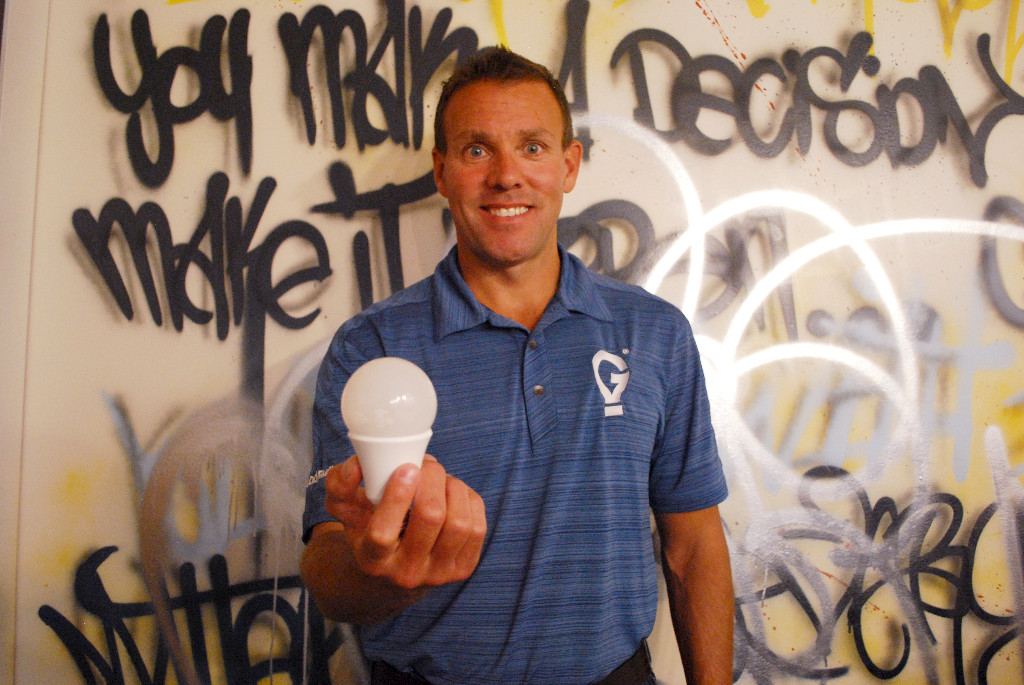 In the meantime, he’s focused on establishing the GoodBulb brand. All of his prior companies – the e-commerce website and the brick and mortar store – are moving under the title of GoodBulb. In addition, they have started manufacturing their own LED lightbulbs, or, GoodBulbs. The first in-house GoodBulb product will be ready in a few weeks, he said.

His passion for the world of e-commerce has not dimmed, either. Enright claims the GoodBulb website currently in the works will be “the best online lightbulb store around today.” It’s being designed by one of the web designers for North Face and Triumph motorcycles.

But at the core of GoodBulb’s branding is one simple phrase: “Be Good.” It’s a phrase that Enright connects with his personal story, and with the hope he has to use his business to help others.

“We’re not gonna change the world. We’re not going to do anything crazy like that,” he said. “But what we are doing, is taking a product that’s been around forever, and doing more than just selling a lightbulb.”

For Enright, GoodBulb is the answer to a desire he had long ago.

“It feels like what I’ve been looking for since I answered that ad in the paper 16 years ago,” he said.

Tom Enright and his wife Tammy, his daughter Anna and son Chase.

Come and hear Tom Enright speak at these events:

1 Million Cups Fargo: Weekly meet-up to hear from local entrepreneurs. October 12, 9:15 AM at the Stage at Island Park .