Emerging Prairie is excited to announce a partnership with Microsoft as our community works towards making Grand Farm a reality.  This creates a one of a kind partnership between farmers, businesses, government, and entrepreneurs. Microsoft is investing $1.5 million in the project and we will be bringing the talent of the company’s technologists and data scientists to help realize the vision and ambition of the Grand Farm to be the first fully autonomous farm.

“We appreciate the vision of Grand Farm because it’s not just about creating technology, but it’s focused on creating a community and an ecosystem because that’s what it takes to bring technology to life,” shared Microsoft President’s Brad Smith at the announcement on Thursday afternoon. “We will spend $1.5 million as a company to help bring the Grand Farm to life. We’re excited about this contribution of money, of technology, of expertise, and how it gives us an opportunity to deepen and broaden our partnership with the community of North Dakota.” 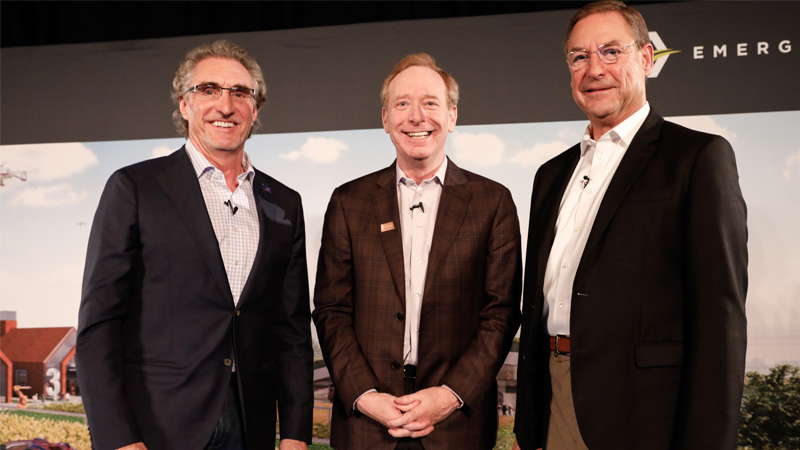 Grand Farm is led by Emerging Prairie and aims to capitalize on the region’s potential in the agriculture and technology industries. Grand Farm is designed to inspire collaboration among businesses, organizations and entrepreneurs to develop the fully autonomous farm, which will help address issues critical to family farms worldwide — labor shortages and rising operational costs.

“Grand Farm sees things the way it could be, and says why not. To enable a dream like Grand Farm it takes people of vision, engagement, and passion. And we’re excited to be here in a partnership with Microsoft,” stated Barry Batcheller, Grand Farm Steering Committee Member.

You can learn more about the efforts supporting Grand Farm at www.grandfarm.com.