The Brew Masters of Fargo

About Aaron and Fargo Brewing Company 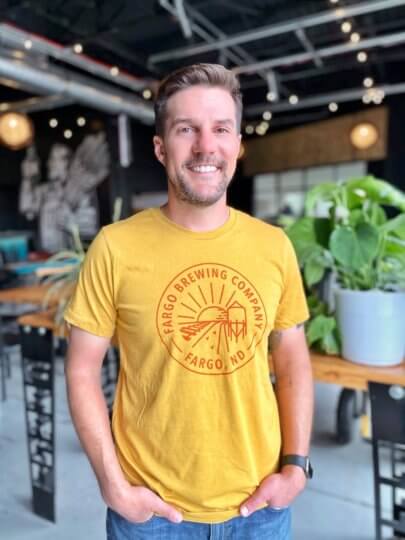 Aaron Hill is the Co-Founder & Sales Manager of Fargo Brewing Company. Aaron is a St. John’s graduate and attended graduate school at the University of Mary’s Fargo campus.

Since 2011, Fargo Brewing Company has been creating an exceptional experience for communities through its handcrafted beers. The first Fargo Brewing Company beer was seen on tap back in 2011, and in 2013 the team behind the brew opened their taproom doors, with a recent remodel this past April of 2021. Co-Founder Jared Hardy, in graduate school, needed to write a business plan; this fictitious plan became a reality after Jared shared with fellow Co-Founder Aaron Hill his graduate program project; a Fargo, North Dakota brewery. The duo ended up finding two partners who could bring his plan to fruition. “It was never really a clear decision to be an entrepreneur,” says Aaron when describing his entrepreneurial journey. Aaron loved the project that Jared had begun, and with the help of their fellow partners and numerous mentors, what started as an idea, was quickly becoming their reality.

This leap into the entrepreneurial world has now sent their brews to all of North Dakota, parts of South Dakota, Minnesota, and Nebraska. Fargo Brewing has worked to pave the way for future breweries in and around the Fargo area. “As I usually say, we were the ones hacking through the jungle with a machete, and now there’s a beautifully paved road behind us for others to use,” says Aaron. Changing perceptions, laws, and markets was no easy task; however, the impact of Fargo Brewing has gone well beyond the taste of their brews. What started as a company whose mission was to “Bring Hand Crafted Beer to the Heartland” is more focused, now, on creating experiences and fostering community through their space and events.

Join the Fargo Brewing team in their new space for a beer, concert, soda, and eventually, a bite to eat to experience the fullness of Fargo Brewing and what they’re all about, and how they live out the mission of community building.